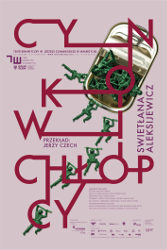 2015 Literature Nobel Prize Winner Svetlana Alexievich’es non fiction prose adaptation. The Soviet intervention in Afghanistan is described through a collection of first-hand accounts from veterans, nurses and mothers of young soldiers returned to then from the war in zinc coffins. It confronts feelings of hope and war enthusiasm with the feeling of nonsense. In the age of cowboys, announcing faith in force as a political solution, debuting director takes the historical war in poetic yet terrifying Afghanistan as a starting point to question war as an answer at all. He created a show that is both pacifist… and filled with music.

The show was awarded first prize for Best Directing, a Special Prize and the Audience Award for best performance and the best actor for Michał Kosela at Festival of Young Directors Confrontations m-teatr in Koszalin.